Welcome to the Wonderful World of .... 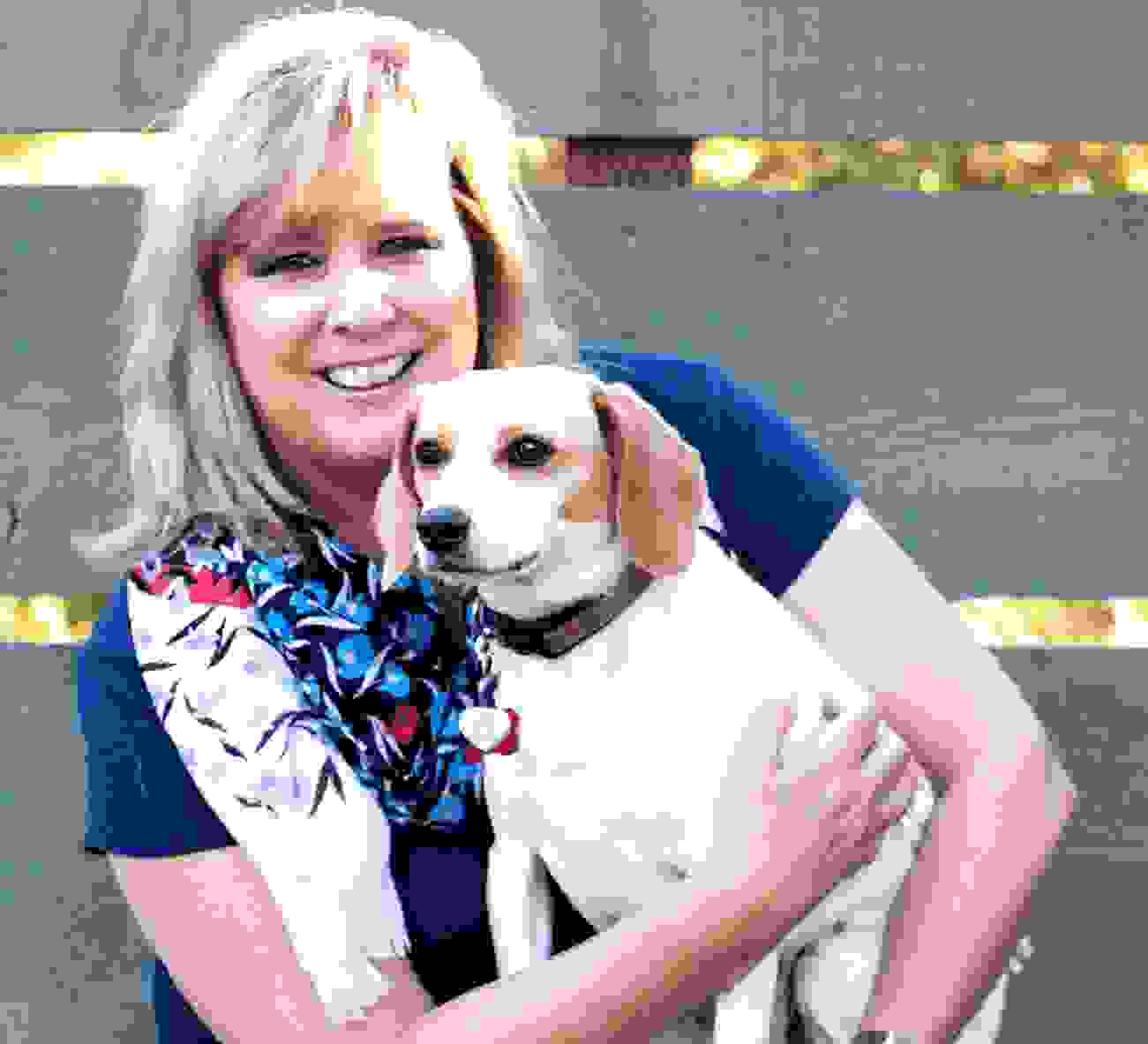 Poppy In the Wild By Theresa Rhyne

What motivated you to write the book, Poppy In the Wild?

I am a long time dog lover and always had dogs in my life. I love dogs. When Poppy went missing and we contacted the Pet Recovery Specialist, I realized I didn’t know a lot about lost dogs and what to do and I was so amazed at everything they taught me and how accurate they were and how much they knew. I kept saying to them “You know so much. You need to write a book. You need to be telling people about this.” And they said to me we don’t write. We find dogs and I was like, ‘Oh right okay, I’ll write.’ I was little slow on the uptake. My significant other, Chris, who was very involved in the search for Poppy said I should write a third book.

Tell us about your other two books.

I tend to write about tragedies that happen to me and my dogs but with happy endings. I don’t know if I wanted this to be my writing career. Its not so great to keep having to live through tragedies to write a book.

How did you become a writer to begin with?

I always loved to write and I’m a huge reader. It was my creative outlet until I went to law school which killed all creativity. After law school I wasn’t writing or reading much, because I was practicing law. Then I was headed for a divorce and I was looking for something to do for myself. I decided I would go back to writing so I started taking some writing courses at UCLA extension. It was mostly fiction. Thats what I spent my time reading and I was working on a novel. After my divorce and moving out on my own, truth got stranger that fiction. I adopted a dog who got cancer within a year and then I went through the whole cancer experience with him. It was my first cancer experience. People in my family never had it. Going through this, newly out on my own, was very traumatic for me. My vet told me that with chemotherapy and surgery, he would only live a year and he was only two at the time and they were wrong. A year later, he was still with us. Two years later he was still alive. Three years later he was still alive. At which time, I found a lump and I was diagnosed with breast cancer.  So, I thought, I know what to do. I’ve been through this. It might surprise people but the treatments are very similar for dogs and for humans. The dosages are different but one of the chemo therapies was the same. I started blogging what I was going through with my cancer experience. It was 2009. Blogs were in their heyday at that time and relatively new. It started getting a lot of attention. I originally started the blog to update my friends and family, so I didn’t have to keep repeating the same story over and over again, but I also quickly found that the writing was how I was processing what I was experiencing and how much I would really relying on what I had learned from my beagle from when he went through cancer. It got picked up for a couple of women’s magazine and people told me that I should write a book and at first I thought, well I already said everything on the blog. The blog is very raw and in the moment and not the same as a book but I realized I could try.  Narrative nonfiction isn’t all that different from fiction. The agent that I worked with was wonderful and helped me edit it before it went out. This was in 2012. I went through cancer in 2009. Its an awful lot of cancer in this tiny house.

Are you still a lawyer?

Yes, I’m still lawyering. I love publishing and I love being able to connect with people in this way but it doesn’t pay what you get as a Lawyer. I haven’t quit my day job. The Dog Lives and So Will I was my first book. It hit number one on the New York Times best seller list for three weeks. It got translated into 7 different languages and was also a best seller in Brazil. This is the book that started it all. The second book was a sequence to that about Shamus, the dog in the first book. He was diagnosed with a different kind of cancer after many years of surviving. So it was the two of us, my significant other Chris and I and this little beagle, Shamus and in this one tiny now we had two dogs, both from testing facilities.

We had a few years without any tragedies until Poppy came. He came from China, pretty close to feral. We were supposed to just be fostering her and we had her for six weeks. I brought her to work everyday because it was good for her to socialize with a lot of people. My paralegal fell in love with her. She decided she wanted to be the one to adopt her. They brought her home for an overnight and took her for a walk and a thunderstorm broke out and Poppy was able to twist out of her harness. She ran across several busy streets which was terrifying enough and then ran into the 1500 acre wilderness park in the middle of a thunderstorm.

We were at a Lakers Game and ended up leaving and coming back and spent the first night in the canyons calling out to her looking for her but I learned that was the wrong thing to do.

Why is it wrong to call out their name?

I learned that you can’t go from your instincts.You have to go from the dog’s instincts. A dog on the run, a dog who is somewhere unfamiliar and particularly a dog like Poppy, everyone is a predator. So when we were walking out and calling out to her, we were causing her to hide more or keep running because she would feel like she was being hunted. It makes sense. In the back of the book, there is an Epilogue with explanations as to what to do. It is counter intuitive but easy to understand from the dog’s perspective who is terrified and just wants to hide.

In Poppy’s case, she was in a wilderness park and we figured out what she was doing. In the early morning she would pop up to someone’s henhouses that backed up to the park for food or water. And go back into the wilderness park.

Did she have a GPS?

Yes, she had a tracker but the batteries died. The more often you check,  the more the battery drains. I was frantic and checking it all the time so her battery died at 1:00am in the morning the first night. As it turns out, when she was found, she did not have her collar or her gps tracker on her.

How did you get her?

Not to give away the ending of the book, they used a satellite map and figured out what would be a logical hiding place for her. And they posted thousands of flyers everywhere and we got regular reports from people who would see her at different spots. They did this for five days. And they would map it out and figured out a pattern based on sightings. So they were able to set a humane trap. Someone with experience with dogs saw her on the route she was being tracked on and ended up catching her. He knew what he was doing.

How was she?  She was fine. No worse for the wear. She had lost a pound.

How long was she gone? Five and a half days.  She seemed braver and happier to be around people.

When did you decide you were going to keep her?

Right after that. Beagles are great dogs.

If you’re gonna get a beagle, you have to have a good sense of humor because they are going to outsmart you. You have to be able to laugh at it. They are high energy and stubborn, too.

Where is your book being sold?

Bookshop.org, Barnes and Noble, Amazon. In Indie book stores. Also, on Kindle and Nook but I’m still a paper reader.

How many dogs do you have now?

We have three now. We have Roe, a retired hunting dog that was left chained up in a backyard after the people didn’t want him anymore. I’m not good at fostering. I always keep them.

Are you writing another book?

Actually, with the covid pandemic, I did start writing. I’m writing another novel which is how I started. We were in the editing stage with “Poppy In The Wild” so I had less to do with it,  so it wasn’t enough. I had an idea for a fiction novel for a long time so I started writing in the morning. I felt like I could go into this other world and I could control the world. It helped my anxiety when we went into lockdown.

Do you have any other plans to work closer with dogs? It seems like a definite passion of yours.

Yes, I hope to foster more and write more. I do a lot of volunteer work on the legal side with rescue groups. Now, I rescue and I can help transport them to the foster homes or forever homes. I’ve served on board of directors for a number of rescue groups.

How old were you when you knew you liked dogs?

I grew up in a household full of all different kinds of animals. We had parrots, and hamsters, rabbits. We always had animals. It was a constant.

I got my first dog when I was six years old. I got a puppy for Christmas and I was in my second year of law school when he passed away.

Dogs have always been a part of my entire life. I have nothing against cats but I only really knew dogs and never went towards cats but my mom and sister have.

I can see having a cat or two. I grew up all over Southern California. My parents remarried and divorced so we moved a lot. I was born in Hollywood. I went to school at UC Santa Barbara and law school in downtown LA.

Please direct your readers to the Epilogue/Appendex. It is chock full of information, some of which is counter-intuitive but the right things to do if you loose your pet. For example, when you walk around handing out flyers, don’t give people a piece of paper. Ask them to take a picture of the flyer on their phones. Always watch for security cameras. Talk to the camera, hold up the flyer, knock on doors.